To go climbing the Hinkelsteine in Nideggen, you should have some training under your belt. This is a place for climbers, who feel at home in the grades 7 to 10 UIAA.

The so-called “Hinkelsteine” consists of four crags, situated right next to each other. They can be assessed pretty easily from Nideggen itself. Park at the sports ground and just follow the signs saying “Hinkelsteine” downhill for a couple of minutes. The spot itsef is surrounded by trees, so you can find good conditions, even on a hot day.

Climbing itself takes place in conglomerate, like on most of the spots in Niedeggen. The conglomerate contains a lot of polished pebbles, which makes climbing very special. The testpiece of the spot is “Flohtanz” (UIAA 10), right at the first Hinkelstein. If you follow the way down further, you will find amazing routes on the third and fourth Hinkelstein. Especially “Parasit” (UIAA 9) on the third Hinkelstein is said to be among the best routes in this grade in the Eifel. “Dampfbügeleisen” (UIAA 8) and “Bügeleisenkante” (UIAA 9-) both take an amazing and exposed line on the fourth Hinkelstein.

Attention: Some of the bolts are pretty old. Especially on the second Hinkelstein, they can only be described as rotten. Please check even more carefully than on other spots.

Pictures of the Spot

Climbing Hinkelsteine in Nideggen? These people have collected all the information for you. 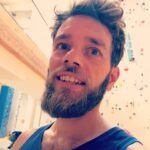