Daniel and Henrik started climbing / mountaineering independently 15 years ago following their urge to explore the mountains. After a short period of climbing indoor (as is quite common in the Ruhrgebiet) Henrik, as well as Daniels path, led quickly to Europe’s various climbing destinations, from the alps down to sport climbing and bouldering at the Mediterranean Sea. Independently of each other, both came into contact early on with the topic of route development and bolting when they realized the necessity of this work for the climbing community: No developers, no climbing – as simple as it gets.

Daniels approach to developing begun years before meeting Henrik, on Mallorca, impressed by the great crags and – at the same time – frightened by very old and rusty gear protecting the climbs. This said, with a strong background in indoor route setting, he started searching for information on rebolting and development of climbing areas.

Henrik explored the little, but fine quarries about his home area to train close to nature for his alpine projects. After a lot of annoying lead-tries, scared of the self-made bolts, and very frightened to fall, he realized his options: Long sessions to get to the top to build a top rope or rebolting the climbing areas. But first, he seemed to be alone.

Eventually, Henrik and Daniel met in Finale, Italy just to realize that they were living very close to each other and quickly became friends beyond their passion to climb. Later, they both learned about the more hidden climbing spots along the Ruhrtal and found untouched rock waiting to be climbed. Back then, the two of them opened up the first routes together and set their own standards for what they do: developing new climbs safely and sustainably, renewing existing ones and preserving them for future climbers, protect the natural environment of the rock.

Today they keep on exploring and preserving routes and areas. Standing with both legs in professional and family life and with perhaps less time than in the past, but all the more passion for climbing, Henrik and Daniel continue what began many years ago on a small damp, mossy and crumbly rock next to the river Ruhr.

If you would like to support both of them with future projects, or just want to give your share as a contribution to the existing territories, both of them will be very grateful! 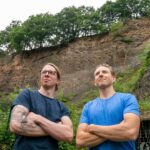 Say thanks and buy a beer for
Henrik und Daniel